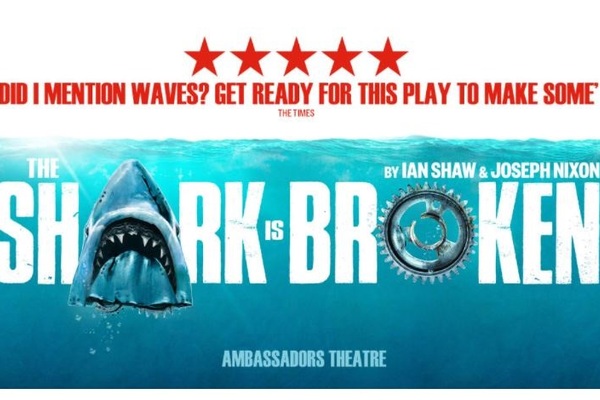 Martha’s Vineyard, 1974: shooting on ‘Jaws’ has stalled. The film’s lead actors – Robert Shaw, Roy Scheider and Richard Dreyfuss – are stuck on a boat, at the mercy of foul weather and a faulty mechanical co-star. Awash with alcohol and ambition, three hammered sharks start to bare their teeth…

Ian Shaw (War Horse and Common, National Theatre) will star as his father Robert Shaw. He will be joined by Liam Murray Scott as Richard Dreyfuss (reprising the role he performed at the Edinburgh Fringe Festival 2019), and Demetri Goritsas (ear for eye, Royal Court; Black Mirror, Netflix) as Roy Scheider.

Directed by Guy Masterson, THE SHARK IS BROKEN reveals the hilarious behind-the-scenes drama on one of Hollywood’s biggest blockbusters.

After a sell-out, critically acclaimed premiere at the 2019 Edinburgh Fringe, Ian Shaw and Joseph Nixon’s brilliantly funny play is now playing in the West End for a strictly limited season.

Please note that THE SHARK IS BROKEN runs at 90 minutes without an interval.
Age recommendation: 14+. This production features strong language and reference to alcohol and drugs.