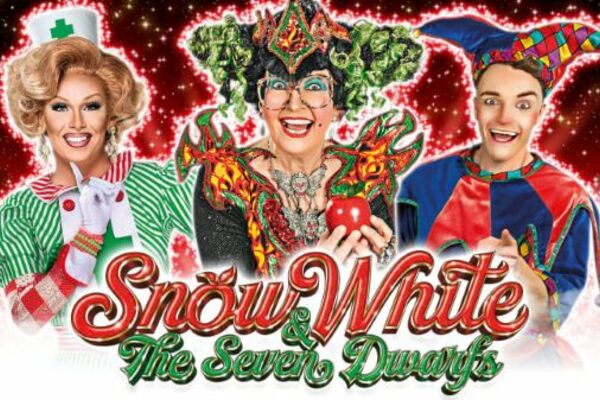 Following her comical cooking antics on Celebrity MasterChef 2021, TV legend and national treasure, Su Pollard, is set to stir up a storm in Sunderland this Christmas as the dastardly Wicked Queen, in Snow White & the Seven Dwarfs.
AND, they had a ball in the 2019 panto extravaganza, Cinderella, so we just had to get them to ‘do it again then didn’t we woo!’

Sunderland Empire are delighted to welcome back the North East Queen of comedy, Miss Rory (Boulevard, aka Dan Cunningham) as the hilarious Nurse Rorina and say ‘Alreet’ to South Shields comic Tom Whalley, as the side splitting Muddles the Jester in the canniest panto of them all – Snow White & the Seven Dwarfs.

Join us on a magical pantomime adventure deep into the enchanted forest for Christmas 2021.  With a beautiful princess, a jealous Wicked Queen, seven bumbling dwarfs, a naughty nurse, a hilarious jester and not forgetting a poisoned apple and a Magic Mirror, it’s too tempting not to!

Snow White and the Seven Dwarfs is produced by Martin Dodd for UK Productions and the company behind panto successes at the Sunderland Empire, including recent productions of the high-flying Peter Pan (2018) and enchanting Cinderella (2019).