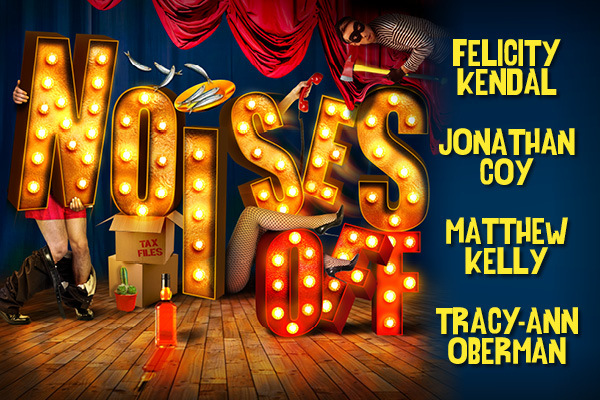 One of the greatest British comedies ever written returns to the West End with a truly stellar cast.

Michael Frayn’s celebrated play serves up a riotous double bill, a play within a play. Hurtling along at breakneck speed, Noises Off follows the on and offstage antics of a touring theatre company as they stumble their way through the fictional farce, Nothing On.

One of the UK’s best loved actors, Felicity Kendal shot to fame in The Good Life, and has won numerous awards for her stage work.

Matthew Kelly won the Olivier Award for Of Mice and Men. His West End credits include Waiting For Godot, Comedians and Troilus and Cressida.

Jonathan Coy played George Murray in Downton Abbey. He has starred in the West End production of Noises Off, and alongside Felicity Kendal in Relatively Speaking.

Tracy-Ann Oberman is well known for her role as Chrissy Watts in EastEnders. Her stage credits include the West End revival of Stepping Out, Edmond with Kenneth Branagh and Boeing Boeing.

Lindsay Posner is one of the UK’s most accomplished directors of comedy. His previous production of Noises Off enjoyed a sell-out run at London’s Old Vic.